Rain on the way for a couple days. We've got a 32 degree night in the forecast Sunday. Ugh.

New growth on the Burford Hollies at the end of the driveway.

Zuni Crape Myrtle. Um, it's too early. The Muskogee on the corner of the house is leafing out too. The old pink in the backyard is still dormant. It's smart.

The morning sky was beautiful this morning. There's a lot of green on the trees. The oaks will start tasseling any day now. The truck is orange, covered with pollen. It's 45 degrees. 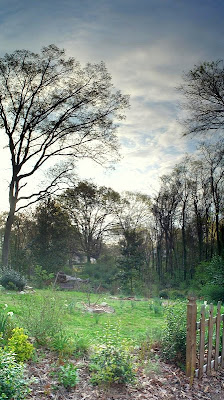 I picked through until I found ones with two plants in each container. Two plus two equals four. I'll separate them out before planting them. A little pruning, some fertilizer, and they'll grow into nice shrubs in a few years.

The dogwoods are blooming.

I spent much of the mid-morning watering things I moved last weekend.

The hosta are up. Even along the North side of the house, there are peaks of new green growth coming out of the soil.

That red and white striped camellia that's solid red with a yellow center has put on some new blooms too. I can't wait to see what it looks like in another 3 years.

The cast aside Loropetalum is blooming too. These two shrubs have been in more locations than I can count. At least 5. And yet they've survived somehow. I need to prune them a bit to shape them up. The hot pink sizzle in the backyard is going to be nice in a few years. I've paired them with all sorts of things including a white and green variegated privet. I know. Privet.

Last year, the wisteria was in full bloom on April 11.

My Carolina Jasmine hasn't even finished yet.

There is green in the sky.

Pansies and the 80s.

It's barely noon and already 79 degrees. It's a beautiful day. The garden center is jumping and I'm taking a lunch break. I go back for an hour and then the manager's meeting.

The pansies by the front walk seem to be popular. These are what I thought I was planting, more purple and pink, more in matching the color of the door and shutters.

This is what I got, for $2 on clearance this past winter.

Can't say it's ugly because they are nice pansies. But the combinations just didn't turn out the way I wanted. I would like more bright color next year. Maybe some orange yellow and white. Or whatever goes on clearance around Thanksgiving.
Posted by Tom - 7th Street Cottage at 3/22/2011 12:33:00 PM 5 comments:

We have honest, true blooms in the garden.

Money Plant. Tucked in between the camellias. I tossed these seeds out last summer. They survived the winter. I hope they reseed well.

Euphorbia. I forget which variety and it's not really a bloom.

I paired it with a yellow striped yucca. Both are evergreen through the winter. I've added some other greens and golds in the form of shrubs, grasses, and sedums.

I've been in this house over 3 years and have never seen blooms on some of these camellias. I'm hoping the final one yet to bloom is a pink one, but someone liked red.

Before we get to that, I spent the morning sowing canna and windmill palm seeds. I put them in cups. I also potted out the willow cuttings. With containers by the trash can, it must be spring.

The hyacinths and pansies along the front walk are an odd combination. I think next year, I'll do solid yellow and white.

This fall, I'll move the one surviving seedling from my sister's Bloodgood Japanese Maple. I dug it up last spring. I didn't know any had survived.

I moved a camellia from a shady corner in the yard where I already have another to the front slope. I also planted the white one I bought yesterday.

Besides being a double white, I couldn't help but chuckle at the name.

The previous owner also planted a short hedge of camellias. There may have been more, but they're long gone. When I moved in, they were scraggly tall ugly things. I cut them to the ground having no idea what they were. I let them regrow. The big one has impressed me the most. It's the pink with a yellow center I've shown other times. On either side, there's a smaller, but double red. The photos show pink, but it's red. It's not lipstick by any means. But it is red.

The one in front.

The one nearer the gully.

Across the driveway, the red one I moved last fall has bloomed. Sort of. The center should be red and white striped. It's an odd bloom. Can't wait to see it fill in at 8-10' tall and wide.

It's 57 degrees and overcast. Great day both with the weather and in regards to the almanac for moving plants and starting seeds. Super full moon, indeed. Back to work tomorrow.
Posted by Tom - 7th Street Cottage at 3/20/2011 11:15:00 AM 5 comments:

It's been a very long week. I'm exhausted. I still managed to find the energy to carry myself across the street to take pictures of the camelias I intend to air layer this spring. I plan to use them along the hill of the front yard. I'd like to create a hedge.

It's what the neighbor I plan to ask about taking cuttings has done. Or someone did many many years ago. These camellias are easily 15' tall.

There's every color from white to red.

I love this pink one.

And this striped one. This is what I thought I was buying. Like the first Golden Shower rose, mine is red. It seems to be a theme.

I took pictures to make notes about which plants I want to take cuttings from.

I'll mix camellias and gardenias (that I need to root this year too) along this hill. I've already got bulbs, and tomorrow there will be more hosta moved.

The wild violets are welcome here. I'm encouraging them to climb into the yard.

By the front door, the pansy planter looks the best it ever has.

I see daffodils that I want to remember so I can divide them and spread orange through other parts of the yard. I'm patient. This could take years.

A camellia planted last year is blooming. It got moved in the fall to a shadier spot.

My new pink and white striped camellia. Isn't it fabulous?

Yeah. And then there's this little treasure. The loropetalum is about to clash horribly with the quince.

Maybe the Redbuds will tone it down a bit.

All the herb containers have sprouts. This is dill.

The beginning of a fire pit. I'll work on it more next weekend when I have some help moving a few stones.